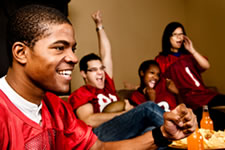 On Sunday, millions of Americans will be watching the Super Bowl with friends, over a spread of food and beer. The Super Bowl is the most watched game of the year, and whether your team wins or not, the night will end with one of the most dangerous drives of the year too, as too many drivers have had too much to drink at their parties. A late kickoff, a long game, and too many drinks without designated drivers results in staggering numbers. Last year, 48% of the 13,000 fatalities from accidents on Super Bowl Sunday involved drivers with a blood alcohol concentration (BAC) level of .08 or higher.

“Those throwing a party where alcohol is served have both a legal and moral responsibility to make sure that their guests are capable of driving safely,” said Loretta Worters, vice president with the Insurance Information Institute. “You don’t want to allow anyone who has been drinking to drive a vehicle while impaired. Not only do your guests risk injury or death to themselves or others, but you may be held financially responsible.”

"Social host liability" is the legal term for the criminal and civil responsibility of someone who furnishes liquor to a guest. You may know it by "Dram Shop Liability" as well. Laws differ from state to state, but 43 states have them. These laws give someone who is injured (like a victim of a drunk driver who was served at your party) the right to sue you. You could even face criminal charges in such a scenario.

Here are some other things to consider for your party on Sunday:

Above all, be an aware and responsible host and/or driver.

If you're attending a Super Bowl party this year, we ask that you drive safely and wear your seatbelt!